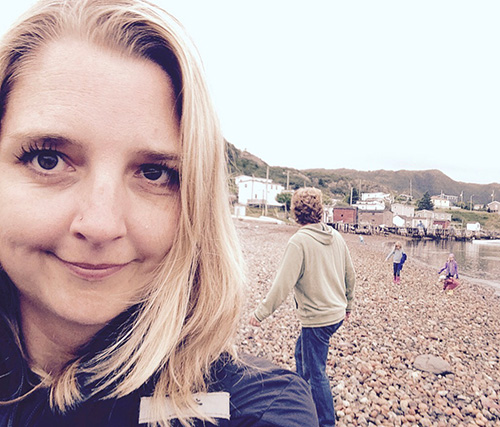 The Writers' Union of Canada is pleased to announce that Lisa McLean has won the $2,500 cash prize for its 27th annual Short Prose Competition for Emerging Writers, for the best story under 2,500 words, with her piece “Dicky’s Bluff.” In addition, the Union will submit the winning story and the eleven other shortlisted stories to three Canadian magazine publishers for their consideration.

Lisa McLean’s short fiction has most recently appeared in The New Quarterly, Riddle Fence, and Room. Her creative work has been longlisted for the CBC Nonfiction Prize (2017) and previously received an honourable mention in the Union’s Short Prose Competition (2014). Lisa is based in Guelph, Ontario, where she lives with her family, and works as a freelance communications consultant.

This year, nineteen Union members donated their time and expertise to read 628 submissions and distill them into a long list of 124 stories. These stories went on to a second round of nineteen readers who selected the finalists to pass on to the jury: Janet Barkhouse, Jacqueline Guest, and Naben Ruthnum.

The jury noted, “There isn't a false note in the setting, the characters, or the story line in Lisa McLean's winning story, ‘Dicky's Bluff.’ In a way, this is a typical initiation story, but the subject matter is serious and unexpected: clashing societal paradigms.”

“Lisa McLean shows remarkable talent and maturity in her writing. All the judges agreed that this well-crafted story is pitch perfect. The plotting is well and subtly thought out with the arc of the story presented in a powerful way. This can often be difficult within a limited word count but this author makes no mistakes. The judges found the voice of the young male characters true throughout, with their choices and behaviour believable and moving. In conclusion, it was obvious this was the winning entry. The judges agreed that Lisa McLean’s talent will be a welcome addition to the Canadian literary scene. Congratulations to this gifted author!"

​READERS FOR THE COMPETITION

The Writers’ Union of Canada (TWUC) is the national organization of professionally published writers. TWUC was founded in 1973 to work with governments, publishers, booksellers and readers to improve the conditions of Canadian writers. Now over 2,100 members strong, TWUC promotes the rights, freedoms, and economic well-being of all writers. TWUC believes a lively and diverse literary culture is essential in defining Canada and its people. Learn more at writersunion.ca.