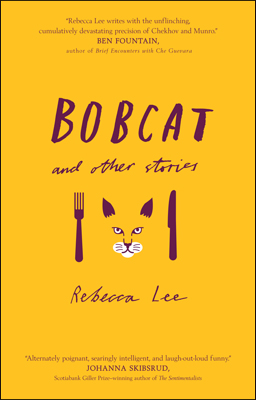 Toronto, June 11, 2013 – The Writers’ Union of Canada announced today that Rebecca Lee is the recipient of the $10,000 first prize in the 16th annual Danuta Gleed Literary Award, recognizing the best first English-language collection of short fiction by a Canadian author published in 2012.

Of Rebecca Lee’s book Bobcat and other stories (published by Hamish Hamilton Canada), jury members Bill Gaston, Alexander MacLeod, and Carol Malyon said: “These seven impeccably crafted stories pull off what may be the most difficult balancing act in fiction.  Working with prose that is simultaneously clear, yet insightfully nuanced, Lee constructs memorable scenes, characters, scenarios and entire plots in which a penetrating intelligence is continually forced to grapple with the raw force of human emotion and the power of unconscious impulses that refuse to be managed or completely understood. What happens when strategy fails, when being smart is not enough, when love or its lack obliterate our best-laid plans? Rebecca Lee knows.  This is a rare collection that all careful readers will appreciate.”

Originally from Saskatchewan, Lee is a graduate of the Iowa Writers’ Workshop and is now a professor of creative writing at the University of North Carolina at Wilmington.

Runners-up Anton Piatigorsky and John Vigna will each receive $500.

Of Anton Piatigorsky’s The Iron Bridge (published by Goose Lane Editions) the jury said: “To fictionalize and dramatize scenes from the early lives of history’s most infamous tyrants and practitioners of genocide is a unique and boldly challenging premise, and Piatigorsky succeeds against all odds. These complex and fascinating portraits illuminate while offering no excuses, no justification for crimes later committed. That these monsters-to-be are given such convincing humanity is a testament to Piatigorsky’s delicate craft, his patience and subtle creativity with the historical material at hand, and insight into the darkest possibilities of the human mind.”

Of John Vigna’s Bull Head (published by Arsenal Pulp Press) the jury said: “This collection pulls few punches in its declaration that life is tough. This is brave fiction that dares to probe the heart’s darker reaches. These characters can’t help but break a reader’s heart — we want things to go well for them, but we know there's no way that's going to happen. These are men who've lost everything and who try their best to make the hurt go away, and in their foibles, and their struggles to connect and to make amends, one can’t help but see oneself.”

The short list of five books was announced on May 13, 2013 and also included Paul Marlowe’s, Ether Frolics (published by Sybertooth Inc.) and Yasuko Thanh’s, Floating Like the Dead, (published by McClelland & Stewart).

The Award was created as a celebration of the life of Danuta Gleed, a writer whose short fiction won several awards before her death in December 1996. Danuta Gleed’s first collection of short fiction, One of the Chosen, was posthumously published by BuschekBooks.  The Award is made possible through a generous donation from John Gleed, in memory of his late wife, and is administered by The Writers’ Union of Canada.

The Writers' Union of Canada is our country's national organization representing professional authors of books.  Founded in 1973, the Union is dedicated to fostering writing in Canada, and promoting the rights, freedoms, and economic well-being of all writers.